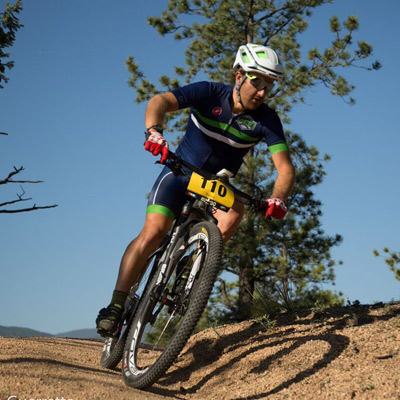 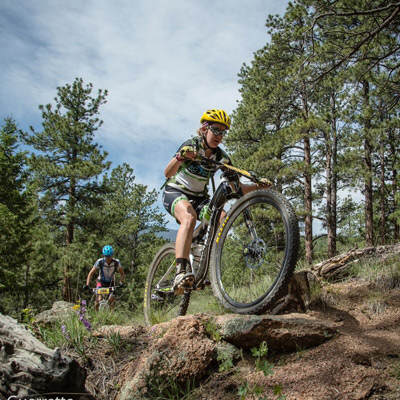 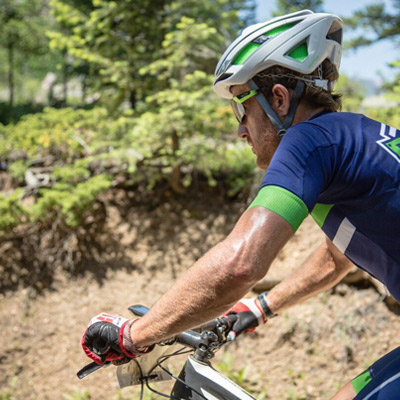 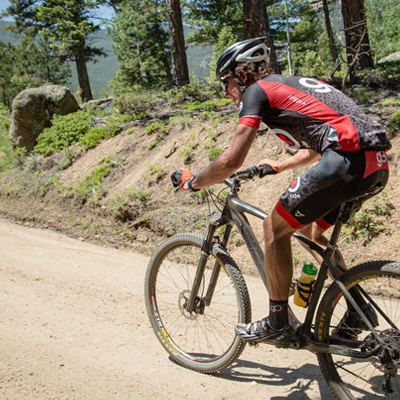 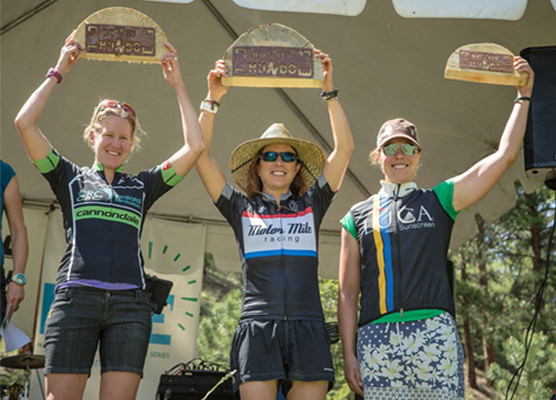 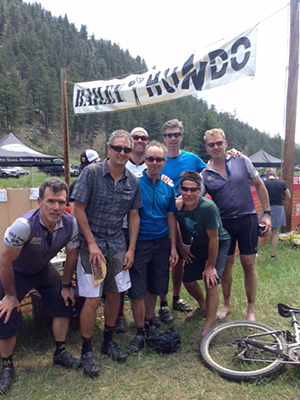 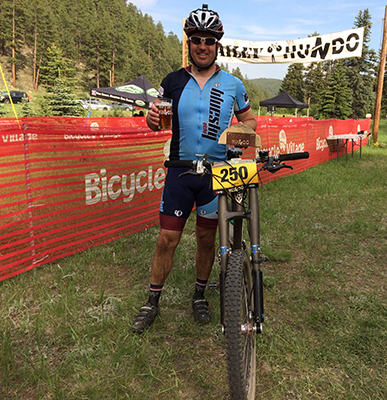 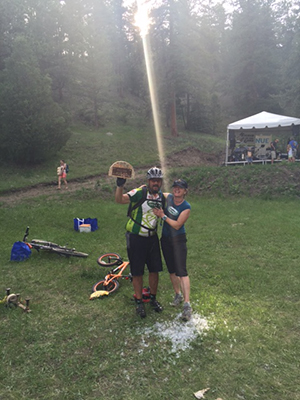 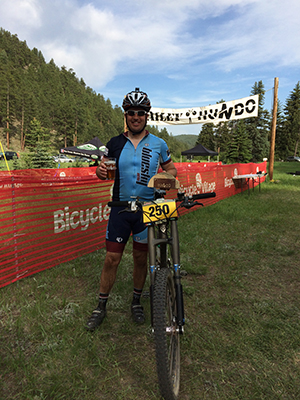 September 28, 2015 – $10,000 donated to BOERA for trail construction, fencing and signage Will be used by Platte Canyon students and Park County residents 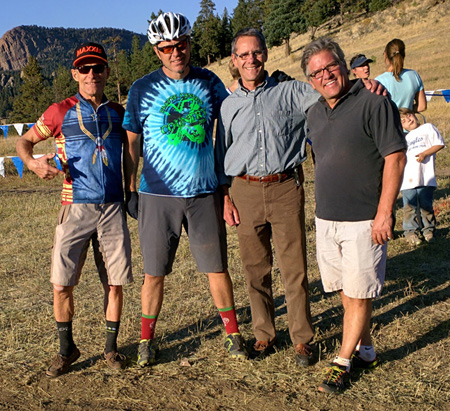 The HUNDO has delivered a grant to Bailey Outdoor Education Recreation Area (BOERA). BOERA has used these funds to start construction of a multi-use trail network on land owned by Platte Canyon School District located at 599 Rosalie Rd, Bailey, CO. The photo at left was taken during a XC meet on September 25, 2015. 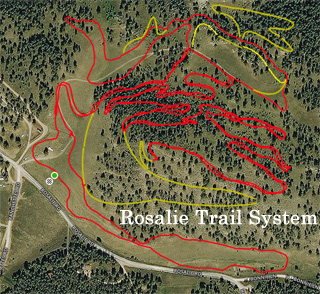 The core mission of the HUNDO is trails, youth and cycling. This grant will support “kids and fitness and cycling grouped together,” which is the direction that the HUNDO is centered. 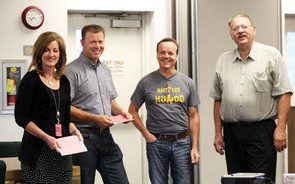 Members of the Platte Canyon Area Chamber of Commerce held an exciting monthly meeting. The Bailey HUNDO gave back at the meeting on Tuesday morning. Platte Canyon School district Superintendent Brenda Craig (left) and John Gerritsen (2nd from left) of Bailey Outdoor Education and Redcreation Area accept donations from Austin Smart (center), director of the Bailey HUNDO. Chamber boardmember Bill Kulenberg (right) announces that $3,500 in proceeds from the race in Bailey, which occurred June 20, will go to Platte Canyon High School for a new wrestling mat. $10,000 will go to BOERA. "It’s exciting to be able to do this and to support such great causes." Smart said.

April 3, 2013 – Exercise bikes donated to Platte Canyon High School Will be used for rehabilitation and fitness 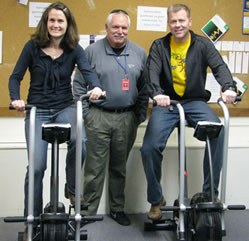 Brenda Hobgood (left), Bailey HUNDO race director, and John Gerritsen (right), HUNDO president, sit on bikes that the HUNDO donated to Platte Canyon High School. Principal Mike Schmidt (center) requested the grant from the HUNDO so he could have the bikes for a rehabilitation regimen for injured athletes. Schmidt is also hoping to use the bikes as part of a fitness course that he is proposing to start in the fall. (Photo by Debra Orecchio/The Flume)

The Bailey HUNDO donated two exercise bikes to Platte Canyon High School at the end of 2012. According to Bailey resident John Gerritsen, president of the HUNDO, the bikes’ value was around $1,200. Mike Schmidt, principal at Platte Canyon, had put in the donation request during the summer.

The core mission of the HUNDO is recreation, said Gerritsen. So the donation of the bikes, with “kids and fitness and cycling grouped together,” is the direction that the HUNDO is moving in, he said. The bikes will be used as part of a rehabilitation regimen for injured athletes, said Schmidt in an email to The Flume. In addition, they will be used as part of the wellness program for district staff, as well as in physical education courses, including a fitness class that is being proposed by Lance Gunkel, a physical education teacher. Schmidt is very grateful to the HUNDO for the donation. “Not only is the event itself a positive for the Bailey community, both in terms of positive exposure for Bailey in terms of financial impact on local businesses, but now we are seeing tangible financial benefits of the event directly to our schools,” Schmidt said. “I am also very appreciative of the entrepreneurial spirit exemplified by the group of people behind the Bailey HUNDO,” he said.

The exercise bikes, which allow for the arms and feet to be moving at the same time, provide a great way to warm up injury-free, said Gerritsen. 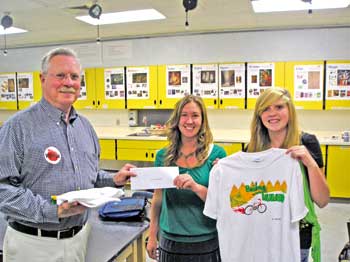 Will be used by students for art and other supplies

Presenting a check Park County Commissioner Dick Hodges presents a $500 donation to Fitzsimmons Middle School art teacher Jennifer Walsh. The money was raised through the sale of t-shirts brandishing the logo for the Bailey Hundo. That logo was designed by Ashley Stein, who won the Bailey Hundo art contest. 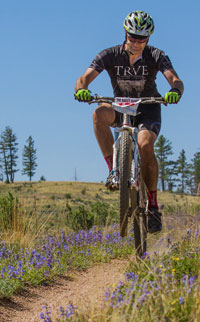 There are other events in the area that we would like you to know about in case you are planning a training ride on the course as a courtesy to minimize user conflicts. Of course areas are still open to the public and you should emphasize the importance of trail etiquette , but a lot of times people would rather avoid the area if they know about the event. Information provided by: Kristin Kahler, Pike National Forest, South Platte Ranger District, 19316 Goddard Ranch Court, Morrison, CO 80465 303-275-5639 [email protected]

2016 Scheduled Events in and around Buffalo Creek

Stay in the loop

You and the HUNDO supports Kids, Bikes, Trails

The HUNDO is an Equal Opportunity organization